The roots for today’s Naeve Health Care Foundation (NHCF) were planted in 1963 by a shared vision between two Albert Lea community leaders. Dick Trow and Chester Leusman saw a need to provide a way to receive contributions for Naeve Hospital to “offer a more organized way for the collection of contributions; particularly from those who wish to bequeath gifts in their wills.”

They asked three other leaders to join them…and the Naeve ‘Hospital’ Foundation was born, beginning with $3,205 in assets: $2,205 in Jobs, Inc. stock and a $1,000 personal contribution from Mr. Leusman. The first interest check was received in 1965…in the amount of $13.33. Later, the name would be changed to Naeve ‘Health Care’ Foundation to better represent all the medical programs it serves… and interest checks would grow substantially.

In 1966, the original Board of Trustees voted to add four additional members; assets totaled $10,345. One year later, they added two more trustees, making them a Board of eleven members. Later, another trustee would be added, creating today’s Board of twelve community leaders.

When the Minnesota Trust Company gave its annual report in 1971, showing assets of $31,881, they agreed to “donate” their services with respect to the “volunteer services” of the trustees. The Board recorded a “vote of thanks for this splendid spirit of cooperation.” It was also in 1971 that the Board published its first listing of gifts and donations in the Naeve News.

In 1972, the Foundation received its FIRST bequest… $79,064 from the “sale of household goods, stocks and bonds” from the Schenhofen Estate. Many other bequests would follow over the 42-year history of the Foundation, the most recent being $375,000 from the Jerdet Family in 2003. It was a deliberated decision in 1974 to begin giving earned interest monies to the hospital rather than using them to build the principal. These first dollars went toward a new chapel in Naeve Hospital.

And then…there was Father Edward Kasal, “the cowboy priest.” Born in Czechlosvakia, he came to America as a missionary in 1905 to serve first in Eastman, Wisconsin, and then to the Dakotas and Montana. Riding throughout the Badlands on horseback to serve his flock earned him the nickname. He spent his life ministering in Jackson, Winona and ultimately Owatonna, where he is buried. Through a family inheritance, frugal living and wise investing, Father Kasal accumulated a sizable estate….of which “every penny went to charity.” Thus, the Kasal Trust Fund was established with the Foundation in 1976 to provide for chemical dependency treatment grants at Fountain Centers. Today, the annual Kasal contribution is applied to general charitable care needs.

The ‘creator’ of the Foundation, Mr. Dick Trow and his wife Elna, both died in 1977…within 14 days of one another. Their combined memorials from grieving friends and family brought $6,052 to Naeve Foundation, bringing the trust fund to $121,700. Mr. Trow’s memory lives on through the growth of the Foundation and the many legacies he left. His partner, Mr. C.J. Leusman, joined his friend in eternal life in 1984.

It was in 1984 that Foundation trustees predicted…“if assets continue to grow as they are” it is not inconceivable that the Foundation could reach “the $1,000,000 mark in five to seven years.”

In 1988, the Foundation celebrated its 25th anniversary. Trustees commissioned local artist, Lloyd Herfindal, to artistically depict the history of healthcare in the community to commemorate the event and raised several thousand dollars through the sale of the painting.

After much discussion and deliberation, an agreement was reached to affiliate Naeve Health Care Association (hospital) with Mayo Regional Health Systems in 1996, giving us Albert Lea Medical Center. A clause in that agreement directed that $2 million would be held in reserve assets with the Naeve Health Care Foundation. Shortly afterwards, the Foundation reorganized and gained 501(c)(3) status: a free-standing non-profit corporation with its own bylaws and governing board.

Albert Lea Medical Center changed its name to Mayo Clinic Health System in Albert Lea as part of the One Mayo branding effort in early 2011. Naeve Health Care Foundation continues to support the local health care organization as an independent 501(c)(3) nonprofit corporation with an independent board of trustees.

The vision and spirit of countless public servants whose passion was directed toward their local hospital continues in a greater way than any of them could have imagined. Naeve Health Care Foundation manages over $4 million of invested monies and contributes thousands of interest dollars to Albert Lea Medical Center annually.

The conference room, the largest on the Albert Lea campus and located on the lower level of the hospital adjacent to Administration, has been renamed the Naeve Health Care Foundation Board Room. 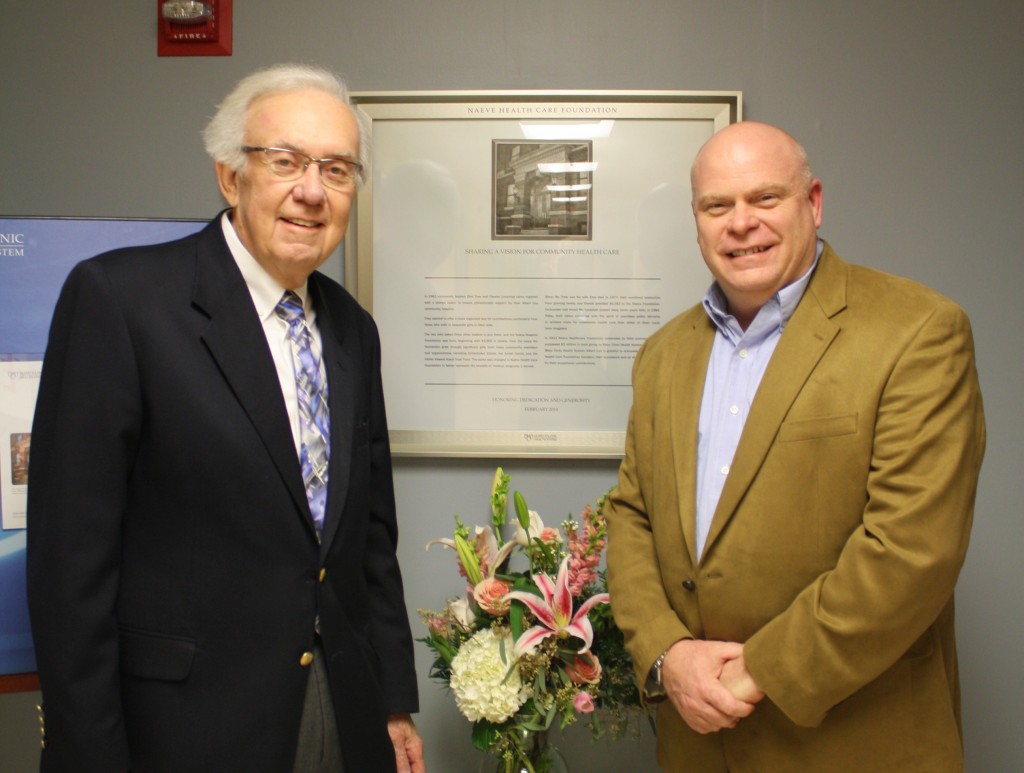 Naeve Health Care Foundation President Clare Vermedahl, left, stands with Troy Doyle, local artist, whose artwork is featured on the plaque located outside of the newly named Naeve Health Care Foundation Board Room. Doyle’s artwork featured was originally commissioned by Michael Eckstrom, M.D., an orthopedic surgeon, and his wife, Nicole, in 2009 in celebration of the Albert Lea campus’ expansion. The painting, entitled “Passing the Torch,” is of Naeve Hospital’s original entrance. 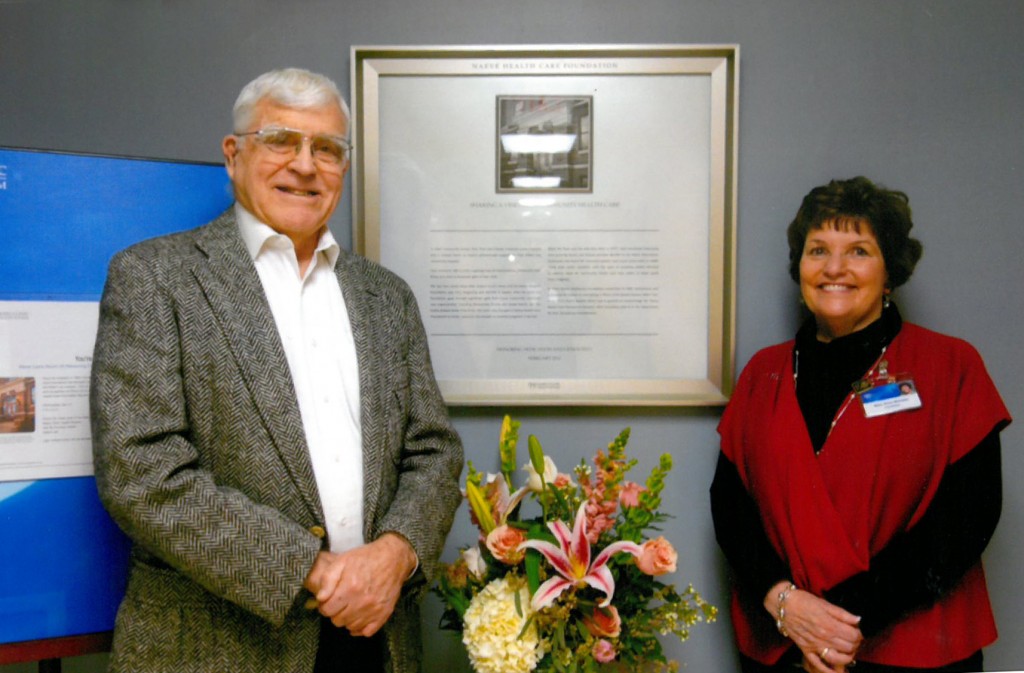